Legendary Barcelona and Ajax manager, Johan Cruyff once said, “In my teams, the goalie is the first attacker and the striker is the first defender.” While the idea of a goalkeeper as an ‘attacker’ may not sound as revolutionary today as it did in the 1980s, it remains an area of the game in which there is certainly room for innovation. Liverpool’s Alisson Becker, winner of FIFA’s The Best Goalkeeper award, is a case in point.

To quantify Alisson’s contribution to the Liverpool attack, we will use a measure known as expected goals chain. For those unfamiliar with xG chain, the metric looks at all the passing sequences that lead to a shot and credits each player involved with the xG. The higher a player’s total xG chain, the higher total quality of chances that they have contributed to. Comparing the xG chain (per 90 mins) for each Premier League goalkeeper, we see that Alisson ranks comfortably as the highest. 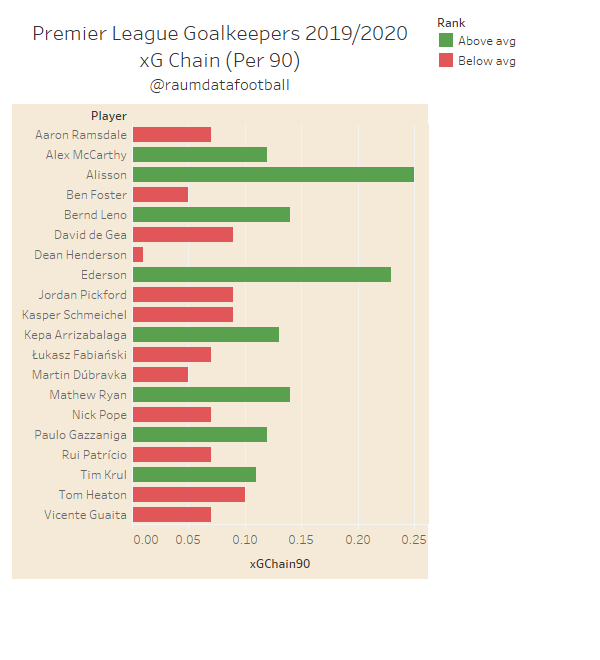 You might argue that Alisson’s dominance simply reflects the fact that LFC create more chances than other teams. However, in the graph below, each keeper’s xG chain/90 is shown relative to their team’s total xG/90. Again, Alisson ranks highest – suggesting that not only is he the keeper that has created the highest total quality of chances but he has also been the most involved in his team’s successful build up play. 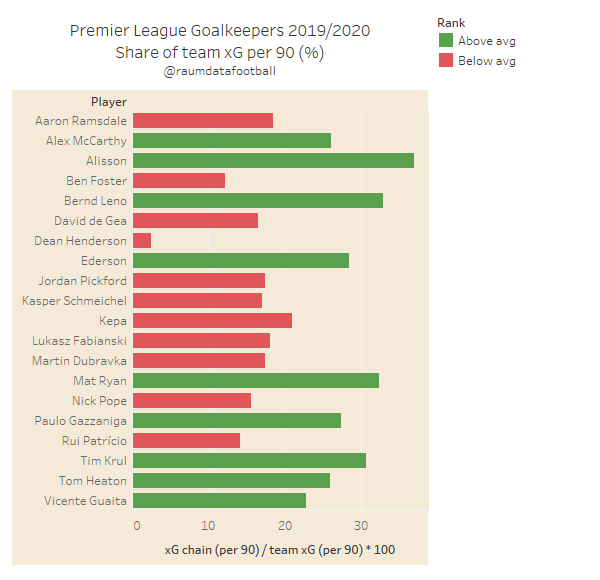 So, what is it exactly that makes Alisson the Premier League’s leading example of an ‘attacking’ goalkeeper? While football fans may be inclined to view goalkeepers that distribute the ball long as ‘old fashioned’, Alisson’s long range passing ability may indeed be a key piece in understanding Liverpool’s attacking success.

When going long, Alisson tends to distribute the ball to the wide areas where he can find one of the fullbacks or wingers. In a team filled with pace and excellent counter attacking ability, Alisson’s long distribution, when executed accurately, can speed up the attacking transition to a point that’s almost impossible to defend against. (Many will remember his assist vs Man United). 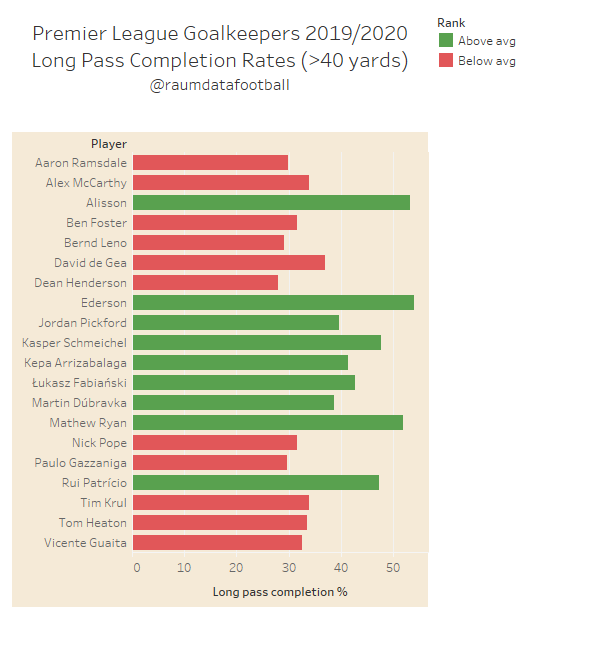 It must be noted, however, that Alisson plays short passes far more frequently than long passes (see graph below). This is to be expected from a team that tends to dominate possession. Alisson’s calmness on the ball in finding short passes, usually to one of his centre backs, is certainly an important asset in possession retention. However, it is interesting to note that Alisson tends to distribute long more frequently than Ederson. Perhaps the Liverpool keeper’s edge on the City number 1 is his ability to be direct more frequently but at similar quality. This is partly a reflection of the differences in how Klopp and Guardiola set up their teams — Pep being more possession oriented. 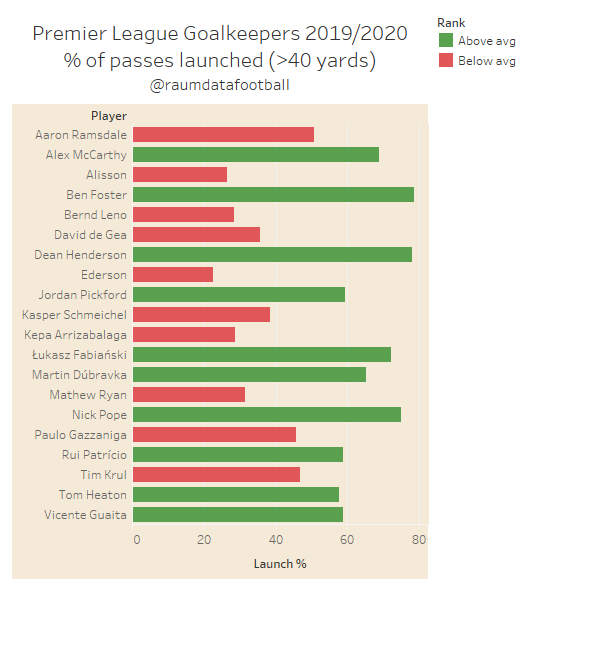 Another reason that Alisson fits so well into Liverpool’s tactical system is his ability to operate outside his penalty area. Since Liverpool tend to play a high line and press high up the pitch, Alisson often has to defend the large space that is behind his defenders and in front of his penalty area. A keeper that defends this space is commonly referred to as a “sweeper”. So far this season, Alisson leads the way as the goalkeeper with the most defensive actions (tackles, interceptions etc) made outside his penalty area per 90. This suggests that he is the league’s most active sweeper keeper (interestingly, Burnley’s Nick Pope ranks as second). 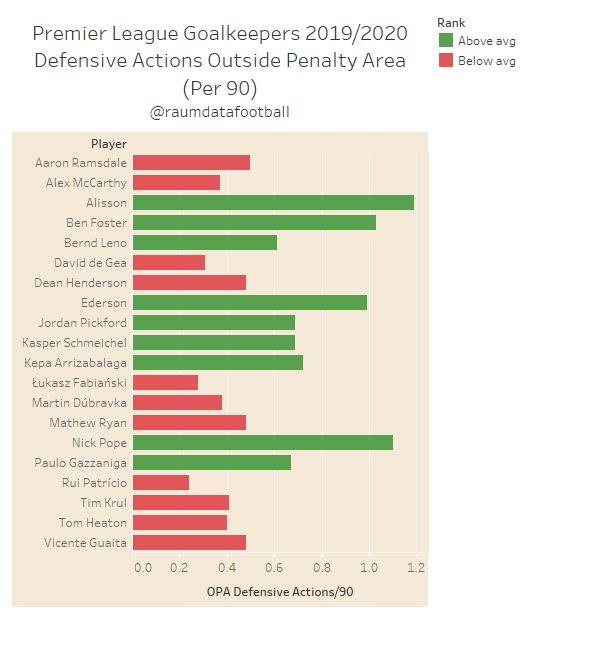 With good reason, football fans tend to worry that sweeper keepers will make fatal errors. After all, a keeper running out of their penalty area leaves an open goal to aim at. Liverpool fans, however, will tell you that their goalkeeper nightmares have reduced significantly since the signing of Alisson (the Brazillian, often exhibiting good decision making and pace, is yet to make an error leading to a goal this season).

Of course, despite the fascinating evolution of the role of the goalkeeper, the basics of the job – stopping shots – cannot be underestimated. To measure each keeper’s shot stopping performance, we will use post shot expected goals. This metric tells you how many goals the average keeper would be expected to concede having faced a certain quality of shots.

The graph below shows each keeper’s post shot xG minus goals conceded. Ideally, this value should definitely be above zero and as high as possible (a keeper conceding less than expected is clearly performing well). While Alisson does not rank first on this metric (that honour goes to Newcastle’s Dubravka), a positive number means that he is conceding less goals than the average keeper would be expected to concede given the quality of chances that he has faced. 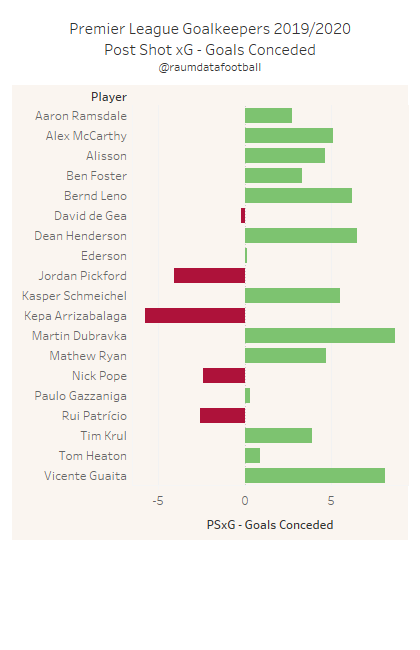 To make things a little bit more interesting, we can look at a plot of [post shot xG – goals conceded] against [xG chain per 90]. Recall that the former measures a keeper’s shot saving performance while the latter indicates the total quality of chances to which the goalkeeper contributes per 90 mins. The higher each number, the better. Thus, the closer a keeper is to the top right corner of the plot, the more they contribute both to the defense and attack of their team. Alisson is not quite in this corner, but nearly. (For a bit more fun, we made the sizes of each dot represent the keeper’s number of defensive actions outside their penalty area per 90 i.e. their effect as a sweeper keeper) 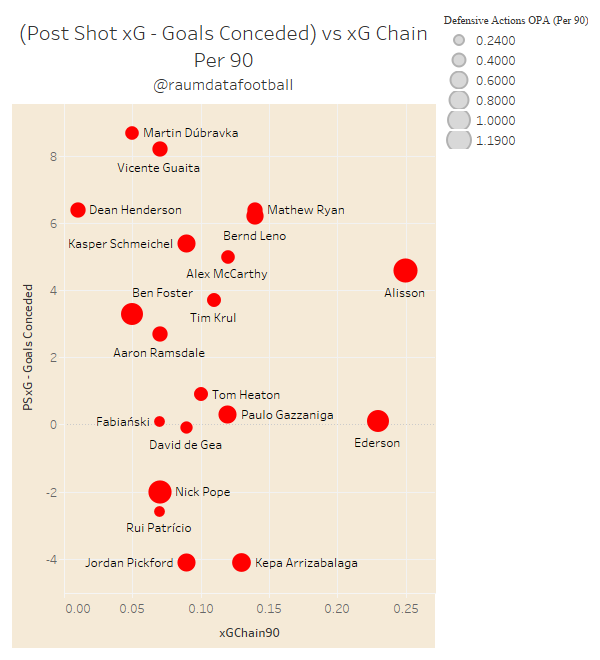 The case of Alisson Becker is evidence of Cruyff’s philosophy that “the goalie is the first attacker.” It is no doubt that managers today place increased demands on their keepers to not only stop shots but also to have good composure, vision and passing ability. Moreover, sweeper keepers are certainly not new to football (though many might associate the term with a fairly modern one — Manuel Neuer).

However, Alisson is an especially interesting case because he shows how the concept of an ‘attacking’ goalkeeper can be employed for a team’s specific style of play. The Brazillian’s excellent long range distribution skills, matched with Liverpool’s pace and counter attacking ability, is a match made in tactical heaven (and one that Jurgen Klopp and his staff perhaps deserve more credit for).